Dispatches From The Closet 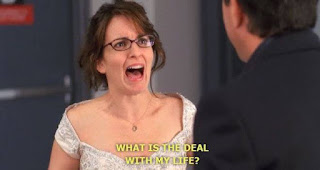 Well, I came out of the closet, and now I want back in.

So I’m picking up my pieces. (For others, this is not easily done.)

Really, just when I’m thinking now is the time to let go, something crazy happens. Let’s talk in tweet-speak, in sound bite savvy, powerpoint-appropriate language. My random dispatches from the dark of my closet.

Thanksgiving was a familial pause, a respite of sorts, albeit Jill Stein lurked in the background, auditing votes. Though not explicitly forbidden from bringing up the election at the dinner table, I could tell my political discourse was not something that anyone was looking forward to hearing. Actually, Tim and I almost came to blows in the mini-van—kids in back—because I wanted to let loose with my Deplorable Speech.

For the record, I never called anyone a racist.

Can we just get on with this reconciliation business?

What if that’s the best I can do?

May I—for fun and convenience—keep calling the other contingent, the other half, by this moniker, The Deplorables?

Is my reconciliation-offer false if I hold onto the deplorability issue?

I’m going to suggest that this awful dichotomy ruined this election, and it’s going to send me back into the closet where I truly belong, anyways.

Woody Allen, who all of my white Evangelical friends would never dream of electing for president, has an awesome little movie called Crimes and Misdemeanors. I think we might call our last presidential “election” Crimes and Misnomers. Pitting racism against abortion is the biggest misnomer around.

Rather than emphasizing the dichotomy, might we emphasize platform and character? This is what I think (about the non-deplorable voter in both parties):

1.     Some vote for the party platform. Many, many people I genuinely respect told me how they supported the Republican platform, and not Trump. Most of this had to do with abortion, but also political philosophy on small government and individualism and capitalism. These Republicans were mostly, if not exclusively, white evangelicals. The White Evangelical crowd. And it’s their closet from which I emerged. I went public this election as a writer, who identifies as a Christian. (I’ve written elsewhere about why I prefer the closet, most reasons having to do with the fact that secular humanists seem to make better Art.) Now, despite their non-deplorability—most white Evangelicals really aren’t racists, guys—I want back in the closet. Sorry I came out. I don’t want to be associated with this guy.

2.     Some vote on the basis of character. For me, character was super important, though I concede entirely that I truly do not know Hillary Clinton’s character. I will say that I found her, like, 100% less repugnant than Trump. Character, in essence, was necessarily reduced to presentation. My vote was connected to this. Presentation. I kept picturing Trump hosting a Japanese or Turkish diplomat at the White House, Melania and Barron  making noises in the next room, or Trump holding peace talks or negotiating trade deals around some great big wooden table with stacks of unread reports before him. Maybe a little gold crown skewed on top of his head. An Alec Baldwin pucker on his lips. A bevy of military generals whispering directions for the coups d'état in his ear. That vision was enough for me (not to mention the other stuff). My guess—is this true?—the non-Deplorable Trump-supporters do not value character over platform.

And this is the only proper dichotomy to offer up—in speaking specifically of White Evangelicals. Some of us value the platform more; some of us value character more.

With these ideas, is reconciliation possible?

Abortion
As I already said, I hate that the life of the unborn is somehow pitted against the born.

I hate that my Christianity is somehow questionable because I opted for character/presentation over platform.

We watched 13th, the documentary, this past weekend. I'm wondering if there will EVER be any sense to an argument to save the unborn, if there's no equal dignity for the born. I really think the logic is suffering here, and the weird pro-life recourse is to deny systemic racism and carry on, or appeal to legislative actions already in place against racism. Racist stuff is illegal. Abortion is legal. Go after the legislature!

What if I reject this?

What if I tell you that I think this idea of privileging legislation as the force of cultural change sounds a little naïve about the real forces behind cultural change?

What if I tell you that this is why I’m going back in the closet? Over the forces of cultural change?

This privileging of legislation is premised on the idea that the government is the most basic, most foundational way to combat ideas. I do wholly support legislation meant to protect all humans; I do not think it is foundational. I think—really, truly—philosophical contemplation and cultural milieu-shaping forces are more weighty than legislation.

I have my own predisposition towards privileging Art as the most important force behind cultural change. I’m not going to say it is; I will, however, say that it’s more forceful over political legislation in shaping humanity.

So, well, I kinda find the White Evangelicals, um, artless.

I spent some time banging on my drums during the election, talking about the potential cultural violence of a Trump presidency. No matter what I said or how eloquently I put it, my rant on “cultural violence” was rejected.

(Allow me to explain what I mean by cultural violence: Supporters keeps telling me how Trump may be uncouth, and he may be an idiot, and he may not be super sensitive—but he’s probably not really a racist himself. This is beside the point. I might even agree, barely. The point is that he unleashed the Deplorables. Hate-crimes, white supremacy sentiment, anti-Muslim frenzy. We didn’t need this. The country didn’t need this. This is a kind of cultural violence. This is the real danger, in my opinion, of the casino-thing, the trade-in wife habit, the handholding with the porn industry; I do not fear legislation; I fear cultural violence.)

The battle against abortion has been reduced to a legislative battle.

Racism has been dismissed as non-existent, or as a “sin problem.”

“A Sin Problem”
May I tell you a secret? I hope I don’t get in trouble for this one. I think I’d say that one of the most damaging things the Church has done has been the tongue-clucking, eye-rolling, lumping-together of miscellaneous issues under the ubiquitous heading of “a sin problem.”

This is how I’ve often heard racism discussed. The rhetoric, with which I’m very familiar as a White Evangelical insider, goes something like this: “Racism is sin, the failure to acknowledge God, the failure to recognize that all humans are made in the Image of God.” With that being said, we know what we need to do: focus on God.

I do not want to disregard this need to focus on God; I am going to assert that the unintended result of saying that racism is just a sin problem is that sin is dismissed, minimized.

That people are left hurting and vulnerable.

Yes, sin is sin. But America is uniquely American. How do we come to terms with our Americanness? In the same way that Monet was definitely French, or music that came out of Castro's Cuba was distinctly Cuban, are there distinct American aspects to our cultural phenomena?

It is, then, only part of the story when we call racism “a sin problem”? Though racism is global, American racism should not be reduced to other kinds of racism. We are not talking about the Hutus and the Tutsis. American racism is uniquely American.

We are talking about American racism.

The American Narrative
I’ve become increasingly interested in this idea. I’ve always been interested in the notion of the Great American Novel, primarily because I wanted to write it. Was it The Catcher in the Rye? The Great Gatsby?

Well, every American writer—lowly me included—is eventually confronted with this quote from Ernest Hemingway, “All modern American literature comes from one book by Mark Twain called Huckleberry Finn. American writing comes from that.”

Folks, he was right. This is our literary history. Other topics are worried over. The United States is vast and allows for a multiplicity of subject matter. But this is our theme, our central—inescapable—narrative. Racism is our literary legacy. Our shackles, our chains. The American Story. And it demands reconciliation.

I’m going to make an offer to the White Evangelical crowd. I won’t push it. I’ll see if I have any takers. I’m going to offer to lead a college-level free class on this American Narrative. I’m serious. The workload will consist mostly of reading, some film, and discussion.

The readings will be as follows:

I need some more women on there. Maybe a little Maya Angelou. I’m absurdly unqualified. A white girl, altogether. (This probably upsets some people; who better to talk to White Evangelicals?) Not a literary scholar. No African-American lit focus.

Just someone peeking out of the closet. 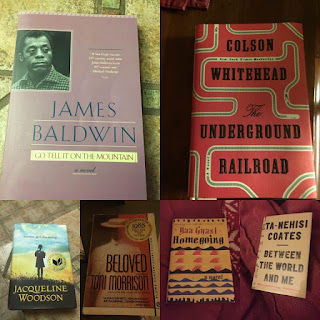 Posted by Jennifer Spiegel at 1:58 PM