Dispatches From The Closet, Part Two 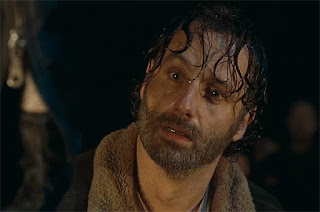 I keep trying to put my finger on it, and it’s not working. What’s wrong with my show? Tim’s bad attitude is infiltrating our TV time. He kinda huffs and puffs, letting me know he’s not thrilled. Carl’s exposed eyeball socket leaves him untouched. Where once our disbelief was fully suspended and we were ensnared in zombie-lore, we are now hyper-aware of our role as viewers. The lovely artifice is cracked.

But what is it?

Is it Negan? It must be Negan.

I thought it was him.

His larger-than-life, cartoonish hyperbole? The all-too-clever Bad Guy was working against the reality of human nature?

But I think it's something else.

Daryl is still Daryl, apparently. Carl is trying, and it’s the first time we’ve ever liked him. Michonne is Michonne. So it’s the persistent failure of Rick, which is too much to bear?

The hopelessness. We can’t take it.

We cannot take it.

There’s a lot to say about this, and I could probably get all nutty and pretend to possess some scholarly insight about TV. I’m thinking, for instance, that—despite my insistence on a Television Renaissance—the medium just can’t sustain prolonged tragedy. Films have ends in sight. Novels have ends in sight. Television? The end is out there, ephemeral, intangible.

The prolonged subjugation of Rick is going to be the ruin of the show.

Who can take it?

Which is what I believe.

Which is what my interest in The Walking Dead is premised upon.

Which is what good old Jessie Jackson must’ve meant when he said, “Keep hope alive” (check out the last minute if you’re not interested in the whole thing).

Which is what MLK spoke about: “I have decided to stick to love . . . Hate is too great a burden to bear.”

I’m writing for a friend who wonders why God would allow all this festering racism and xenophobia and refugee-hatred to have voice. Good always wins, I tell him.

This Brave New World—or what I like to call “The Anti-Intellectual Military Dictatorship”—happened for a reason. Look, let’s not mince words. The Left needs to clean itself up. The Right needs to do the same. Why would God let this happen? Maybe so we can get our house together.

Is this the end of America? Read about the shakedown of the American Dream here.

So we need to fix the American Dream!

Maybe this is our opportunity to get it right. Look at what happened in Phoenix when a Middle Eastern restaurant was repeatedly vandalized post-election.

I guess the question is this: How far down do we have to go before we go back up? I don’t know.

But hope is our best option.

I write from a unique spot, maybe; I’m somewhere on the precipice of two worlds. I live in the White Evangelical world. But I simultaneously exist elsewhere, too: among the writers, the readers, the Secular Humanists.

Ultimately homeless, I guess I get a bird’s eye view!

Leftwingers, the Right is so upset with you that they opted for a nutjob. This is what might get me the most. OMG.

Rightwingers, did you really think you could correct wrongdoing by doing something wrong?

Did you see this meme? 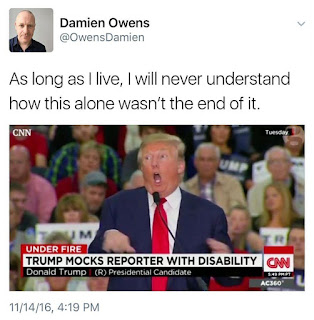 I’m, like, As long as I live, I’ll never understand how anyone could’ve thought we’d fix one problem by creating another.

But here it is. It happened. We have no other option but to get to work and do so vigilantly, hopefully.

Trump is the man. The Man of the Year. Don’t get mad at TIME if they go for him.

I’m sad to say that the Church is not doing so well. You guys should hear the world! I keep wondering if you know what people are saying about you, if you really have your finger on the pulse of the planet, if you can do any better than offer up another kind of idol. I could deal with the incessant Chick-Fil-A and Hobby Lobby war cries. I knew how to talk to my children. But this is more difficult. The liberals understand things you don’t. The White Evangelical Church is now infamous for a couple things: They got Donald Trump into office and they flip out over Starbucks’ cups on the Holidays.

Hand it to Donald for revealing the fractured lines in the Church!

Why did God let this happen?

Maybe for the Church’s sake?

But so much harm will happen? Will it be worth it? Will grace abound? Will widows and orphans and refugees be cared for?

We’ll pull through this.

I remember the last election when all my friends were skittish about electing a Mormon. Now, so many of them are begging, begging, for Romney.

But that’s not the Mormon On My Mind. I’m thinking about Evan McMullin. Who would’ve imagined some Mormon CIA guy would emerge as the voice of reason for the Republican party?

McMullin offered this advice on what to do now:

"In response to Donald Trump's Twitter post this morning (screenshot below), Evan has given us a list of ten things Americans should do if Trump continues to make authoritarian moves.
1. Read and learn the Declaration of Independence, the Constitution, and the Bill of Rights. Know that our basic rights are inalienable.
2. Identify and follow many credible sources of news. Be very well informed and learn to discern truth from untruth.
3. Watch every word, decision and action of Trump and his administration extremely closely, like we have never done before in America.
4. . Be very vocal in every forum available to us when we observe Trump's violations of our rights and our democracy. Write, speak, act.
5. Support journalists, artists, academics, clergy and others who speak truth and who inform, inspire and unite us.
6. Build bridges with Americans from the other side of the traditional political spectrum and with members of diverse American communities.
7. Defend others who may be threatened by Trump even if they don't look, think or believe like us. An attack on one is an attack on all.
8. Organize online and in person with other Americans who understand the danger Trump poses and who are also willing to speak up.
9. Hold members of Congress accountable for protecting our rights and democracy through elections and by making public demands of them now.
10. And finally, in the words of Abraham Lincoln, have "malice toward none, with charity for all" and never ever lose hope!"

Reading widely, diversely, about people who are not you. I’ve had numerous conversations about reading during this Post-American Season! Reading is political. Get a book.

Writers, we got this.

Posted by Jennifer Spiegel at 1:17 PM