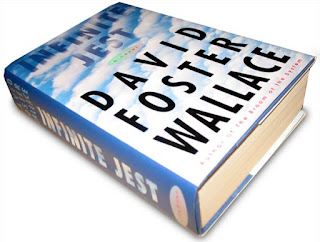 “In the eighth American-educational grade, Bruce Green fell dreadfully in love with a classmate who had the unlikely name of Mildred Bonk. The name was unlikely because if ever an eighth-grader looked like a Daphne Christianson or a Kimberly St. Simone or something like that, it was Mildred Bonk. She was the kind of fatally pretty and nubile wraithlike figure who glides through the sweaty junior-high corridors of every nocturnal emitter’s landscape. Hair that Green had heard described by an overwrought teacher as ‘flaxen’; a body which the fickle angel of puberty—the same angel who didn’t even know Bruce Green’s zip code—had visited, kissed, and already left, back in sixth; legs which not even orange Keds with purple-glitter-encrusted laces could make unserious. Shy, iridescent, coltish, pelvically anfractuous, amply busted, given to diffident movements of hand brushing flaxen hair from front of dear creamy forehead, movements which drove Bruce Green up a private tree. A vision in a sundress and silly shoes. Mildred L. Bonk.”

(Since I own the book digitally, it’s easy for me to find my favorites.)
Posted by Jennifer Spiegel at 2:55 PM