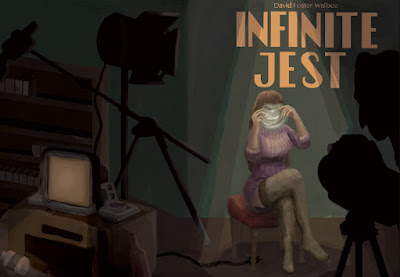 My latest DFW theory is not flattering, I’m afraid. This said from the half-way point. I’m thinking that Infinite Jest does not accomplish what I particularly want from a novel, which is to be absorbed. I’m not much of a minimalist, so the length—albeit cra-cra—is not the problem (well, it kinda is); rather, it’s that I don’t care about any of the characters! I’m fascinated; I’m wonderstruck; I’m gonna finish. But do I care?
Maybe I care a little about Gately. Just a little. (I do perk up a little during his parts.)
Can a novel successfully be built upon powerhouse vignettes? Apparently, yes. If that’s what this is. Do these awesome bits hold together and form a narrative? I’m not sure.
But I guess it boils down to what you want your narrative to accomplish?
Here are some stellar writing examples (another part of my theory, which sounds unkind, is that no “normal” human being could capture this kind of excruciatingly close/intimately-accurate detail—and so DFW’s unsoundness which could be seen as extraordinariness is revealed in this work):
Consider Gately, our hero. “It’s suggested in the 3rd of Boston AA’s 12 Steps that you turn your Diseased will over to the direction and love of ‘God as you understand Him.’. . You get to make up your own understanding of God or a Higher Power or Whom/Whatever. But Gately, at like ten months clean, at the . . . podium in Braintree, opines that at this juncture he’s so totally clueless and lost that he’d [ask someone to] just tell him what AA God to have an understanding of, and give him totally blunt and dogmatic orders about how to turn over his Diseased will to whatever this Higher Power is. He notes how he’s observed already that some Catholics and Fundamentalists now in AA had a childhood understanding of a Stern and Punishing-type God, and Gately’s heard them express incredible Gratitude that AA let them at long last let go and change over to an understanding of a Loving, Forgiving, Nurturing-type God. But at least these folks started out with some idea  of Him/Her/It, whether fucked up or no. . . he feels Nothing—not nothing but Nothing, an edgeless blankness that somehow feels worse than the sort of unconsidered atheism he Came In With.”
There is a woman with “a sexually-credible body.” I love this detail.
And Joelle shows up in rehab with her “weirdly-familiar-but-Southernish-sounding [voice] . . . and “past-believing bod and the linen face [she is veiled] announcing she was a vegetarian and would ‘rather eat a bug’ than even get downwind of a boiled frank.”
Small character notes speak volumes. “Orin says one reason Avril dislikes music is that whenever she hums along she sounds insane.”
I don’t actually know if this guy will turn into a major character, but DFW gives every single walk-on or minor person idiosyncratic and perfect details. “Like many gifted bureaucrats, Hal’s mother’s adoptive brother Charles Tavis is physically small in a way that seems less endocrine and more perspectival.”
And we move into a crazy bit on a druggee who kills animals at night. “He moves nightly through urban-animal territory. Liberated housecats and hard-core strays ooze in and out of shadows, rustle in dumpsters, fuck and fight with hellish noises all around him as he walks, senses very sharp in the downscale night. You got your rats, your mice, your stray dogs with tongues hanging and countable ribs. Maybe the odd feral hamster and/or raccoon. Everything slinky and furtive after sunset.”
DFW, a U of AZ grad (Go Wildcats!), captured the desert:  “. . . the scalp-crackling gust of Phoenix heat . . .”
I’m pretty sure DFW could’ve written about anything. Anything.
But will it amount to something

Posted by Jennifer Spiegel at 6:51 PM No comments: 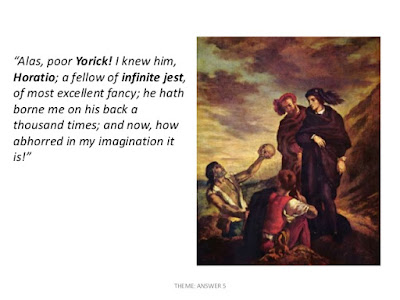 “The most hated Incandenza film, a variable-length one called The Joke, had only a very brief theatrical release . . . The art-film theaters’ marquees and posters and ads for the thing were all required to say something like ‘THE JOKE’: You Are Strongly Advised NOT To Shell Out Money to See This Film . . .” Then, when it begins, “what was on the wide public screen was just a wide-angled binoculated shot of this very art-film theater’s audience filing in with espressos and finding seats and sitting down and looking around and getting adjusted and saying knowledgeable little pre-movie things to their thick-lensed dates . . .” The audience watches until they realize they are seeing themselves and smiles drop. . . And they leave.

Posted by Jennifer Spiegel at 8:04 PM No comments:

Oh, but the finesse!

“The first birth of the Incandezas’ second son was a surprise. The tall and eye-poppingly curvaceous Avril Incandenza did not show, bled like clockwork; no hemorrhoids or gland-static; no pica; affect and appetite normal; she threw up some mornings but who didn’t in those days?”

And Mario is born “on a metal-lit November evening.”

“He had to be more or less scraped out, Mario, like the meat of an oyster from a womb to whose sides he’d been found spiderishly clinging, tiny and unobtrusive, attached by cords of sinew at both feet and a hand, the other fist stuck to his face by the same material.” 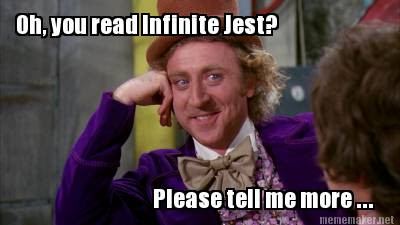 Posted by Jennifer Spiegel at 7:19 PM No comments: