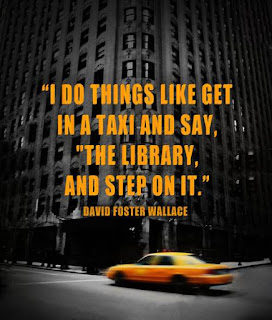 Infinite Jest was published in 1996.

I’m about 150 pages in and, admittedly, simultaneously confused and smitten. At this point, I’m into the writing. I am, however, thinking much about the historicity.

Now, some passages that seem madly important for historical analysis . . .

I love, so very much, the piece on the “Jarvik IX Exterior Artificial Heart”: “The woman, a 46-year-old Boston accountant with irreversible restenosis of the heart. . . [was] pursuing her active schedule with the extraordinary prosthesis portably installed in a stylish Etienne Aigner purse . . . [She] was actively window shopping in Cambridge, Massachusetts’ fashionable Harvard Square when a transvestite purse snatcher . . . brutally tore the life sustaining purse from the woman’s unwitting grasp. The active, alert woman gave chase to the purse snatching ‘woman’ for as long as she could, plaintively shouting to passersby the words ‘Stop her! She stole my heart!’ . . .[P]assersby merely shook their heads at one another, smiling knowingly at what they ignorantly presumed to be yet another alternative lifestyle’s relationship gone sour.” Gold.

Then, there’s a lengthy passage on the advent of video telephony and the return to voice-only telephony. Why did it happen? “It turned out there was something terribly stressful about visual telephone interfaces that hadn’t been stressful at all about voice-only interfaces. Videophone consumers seemed suddenly to realize that they’d been subject to an insidious but wholly marvelous delusion. . . Good old traditional audio-only phone conversations allowed you to presume that the person on the other end was paying complete attention to you while also permitting you not to have to pay anything close to complete attention to her . . . Video telephony rendered the fantasy insupportable. Callers now found they had to compose the same sort of earnest, slightly overintense listener’s expression they had to compose for in-person exchanges . . . And the videophonic stress was even worse if you were at all vain. I.e. if you worried at all about how you looked. As in to other people. Which all kidding aside who doesn’t.” All of this morphs into the creation of high-definition masks—first, for faces, and then, for the entire body. Eventually, consumers—having had enough—go back to voice-only phones!

What would DFW have done with social media?
Posted by Jennifer Spiegel at 2:43 PM