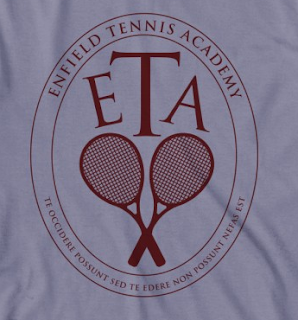 One pivotal bit for me (this may be a masterpiece of pivotal bits—does it work as a novel?)

Remember Hal’s dad’s dad’s—Hal’s grandfather’s—rant to Hal’s dad about how Hal’s great-grandfather had treated him? (If you had trouble following that sentence, you’ll understand some problems in navigating DFW.) Do I have it right? It’s a brilliant piece of writing in which DFW shows how one human can utterly reduce another.

“Kids today . . . you kids today somehow don’t know how to feel, much less love, to say nothing of respect. We’re just bodies to you. . . We’re environmental. Furniture of the world. . . It’s my fault, Jim, home so much, limping around, ruined knees, overweight, under the Influence, burping, nonslim, sweat-soaked in that broiler of a trailer, burping, farting, frustrated, miserable, knocking lamps over, overshooting my reach. Afraid to give my last talent the one shot it demanded. Talent is its own expectation, Jim: you either live up to it or it waves a hankie, receding forever. Use it or lose it, he’d say over the newspaper. I’m . . . I’m just afraid of having a tombstone that says HERE LIES A PROMISING OLD MAN.”

. . .  a rant that reduces Hal’s father as a boy to tears and ends with Hal’s grandfather drunkenly saying, “. . . I know you’ve seen me brought home on occasions, dragged in the door, under what’s called the Influence, son, helped in by cabbies at night, I’ve seen your long shadow grotesquely backlit at the top of the house’s stairs I helped pay for, boy: how the drunk and the maimed both are dragged forward out of the arena like a boneless Christ, one man under each arm, feet dragging, eyes on the aether.”

Man.
Posted by Jennifer Spiegel at 6:57 AM