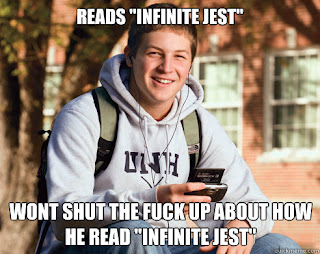 Seriously, this blogging project is for me. As mentioned in the first post, I'm blogging to keep myself accountable. You may want to read if you're a hardcore DFW fan or if you like dipping into splendorous moments . . .

When I tried this book the first time, I didn’t get it. I had no clue that I would spend a chunk of my forties writing about addiction. So, that first time, I got it. A little. Now, I’m enthralled.

“Unit #1, right by the lot in the hospital’s shadow, is leased by some agency that seems to employ only guys in turtlenecks; the place counsels wild-eyed Vietnam vets for certain very-delayed stress disorders, and dispenses various pacifying medications.”

“Unit #2, right next door is a methadone clinic . . . Customers for the services of Units #1 and #2 arrive around sunup and form long lines. The customers for Unit #1 tend to congregate in like-minded groups of three or four and gesture a lot and look wild-eyed and generally pissed-off in some broad geopolitical way . . . [T]he customers of #2 leave the building deeply changed, their eyes not only back in their heads but peaceful . . . while #1’s wild-eyed patrons tend to exit #1 looking even more stressed and historically aggrieved than when they went in.”

“Unit #4 . . . is a repository for Alzheimer’s patients with VA pensions. #4’s residents wear jammies 24/7, the diapers underneath giving them a lumpy and toddlerish aspect. The patients are frequently visible at #4’s windows, in jammies, splayed and open-mouthed, sometimes shrieking, sometimes just mutely open-mouthed . . .”

“Unit #5 . . . is for catatonics and various vegetablish, fetal-positioned mental patients subcontracted to a Commonwealth outreach agency . . .”

Unit #7, boarded up, is where Ennet House residents sneak in to relapse.

And then, we learn more from the world of Unit #6:

“That there’s a certain type of person who carries a picture of their therapist in their wallet . . . That no matter how smart you thought you were, you are actually way less smart than that . . .That loneliness is not a function of solitude . . . That it is statistically easier for low IQ people to kick an addiction than it is for high-IQ people. . .That most Substance-addicted people are also addicted to thinking, meaning the have a compulsive and unhealthy relationship with their own thinking . . .That some people’s moms never taught them to cover up or turn away when they sneeze . . .That ‘acceptance’ is usually more a matter of fatigue than anything else. . . That everybody is identical in their secret unspoken belief that way deep down they are different from everybody else. . . “

I think, honestly, what’ll happen is that I finish this book thinking that the parts were amazing but the whole failed. But I will walk away with a tremendous affection for the man. I feel it now.
Posted by Jennifer Spiegel at 9:50 AM