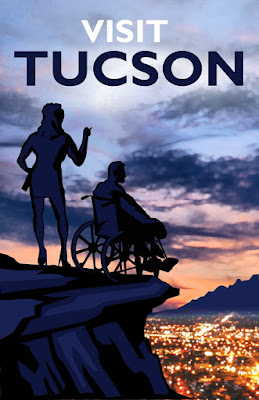 I'm still trying to figure out these guys, in all honesty.

There is the Organization of North American Nations (O.N.A.N.).

Years have corporate sponsors. In other words, time is subsidized.

It is the Age of “Interdependence.”

Stench in Denmark? It's coming from Quebec here.

Canadians are played with a bit, though Avril is Canadian. We hear of bad drivers who might be “like suicidal idiot[s] or Canadian.”

Johnny Gentle is president, for at least a part of the narrative. He’s the “founding standard-bearer of the . . . ‘Clean U.S. Party.’” He’s “the first U.S. President ever to swing his microphone around by the cord during his inauguration speech.” This was “the advent of a Tighter, Tidier Nation.” In his address, he “promised to clean up government and trim fat and sweep out waste and hose down our chemically troubled streets and to sleep darn little until he’d fashioned a way to rid the American psychosphere of the unpleasant debris of a throw-away past, to restore the majestic ambers and purple fruits of a culture he now promises to rid of the toxic effluvia choking our highways and littering our byways and grunging up our sunsets and cruddying those harbors in which televised garbage-barges lay stacked up at anchor, clotted and impotent amid undulating clouds of potbellied gulls and those disgusting blue-bodied flies that live in shit . . .”

Though I'd like to somehow make DFW into a prophetic voice on Trump, I'm not sure I can--though this line is gold: He’s “the first U.S. President ever to swing his microphone around by the cord during his inauguration speech.”

Am I remembering this right? Trump showed up at the GOP convention while Queen's "We Are The Champions" was playing? Was there smoke?

I think DFW did sense the Me-First/Look-Out-For-Number-One backlash . . .
Posted by Jennifer Spiegel at 10:20 AM