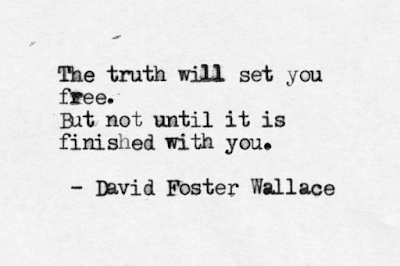 Why do writers write?  I toss that question around often enough, getting all existential on my students, thinking of Roger Rosenblatt’s essay in Time, “I Am Writing Blindly.” (Man, that one essay! Roger Rosenblatt forever in my life!)

And then I inevitably turn to David Foster Wallace’s essay, “The Nature of the Fun.” This, along with Rosenblatt, are right there for me. Fixtures. Haunts. DFW writes, “The best metaphor I know of for being a fiction writer is in Don DeLillo's "Mao II," where he describes a book-in-progress as a kind of hideously damaged infant that follows the writer around, forever crawling after the writer (dragging itself across the floor of restaurants where the writer's trying to eat, appearing at the foot of the bed first thing in the morning, etc.), hideously defective, hydrocephalic and noseless and flipper-armed and incontinent and retarded and dribbling cerebo-spinal fluid out of its mouth as it mewls and blurbles and cries out to the writer, wanting love, wanting the very thing its hideousness guarantees it'll get: the writer's complete attention.

“The damaged-infant trope is perfect because it captures the mix of repulsion and love the fiction writer feels for something he's working on. The fiction always comes out so horrifically defective, so hideous a betrayal of all your hopes for it - a cruel and repellent caricature of the perfection of its conception - yes, understand: grotesque because imperfect. And yet it's yours, the infant is, it's you, and you love it and dandle it and wipe the cerebro-spinal fluid off its slack chin with the cuff of the only clean shirt you have left (you have only one clean shirt left because you haven't done laundry in like three weeks because finally this one chapter or character seems like it's finally trembling on the edge of coming together and working and you're terrified to spend any time on anything other than working on it because if you look away for a second you'll lose it, dooming the whole infant to continued hideousness). And but so you love the damaged infant and pity it and care for it; but also you hate it - hate it - because it's deformed, repellent, because something grotesque has happened to it in the parturition from head to page; hate it because its deformity is your deformity (since if you were a better fiction writer your infant would of course look like one of those babies in catalogue ads for infant wear, perfect and pink and cerebro-spinally continent) and its every hideous incontinent breath is a devastating indictment of you, on all levels...and so you want it dead, even as you dote and wipe it and dandle it and sometimes even apply CPR when it seems like its own grotesqueness has blocked its breath and it might die altogether.
“The whole thing's all very messed up and sad, but simultaneously it's also tender and moving and noble and cool - it's a genuine relationship, of a sort - and even at the height of its hideousness the damaged infant somehow touches and awakens what you suspect are some of the very best parts of you: maternal parts, dark ones. You love your infant very much. And you want others to love it, too, when the time finally comes for the damaged infant to go out and face the world.”
You Want Others To Love It Too.
And so, this passage haunting me, I came across the junkie who gives birth to her dead baby on the welfare-hotel floor “on her side like a cow . . . all the time throughout still compulsively loading up the glass pipe and smoking . . .” The dead baby emerges dry “with no protective moisture and no afterbirth-material . . . all withered and the color of strong tea, and dead, and [it] also had no face . . .”
She is umbilically linked to the dead baby and “she began to carry it around with her wherever she went.”
This dead baby. The junkie and her dead baby. The mother holds it, living in denial. An addict. It's her child, and she loves it, faceless, withered, dry.

Posted by Jennifer Spiegel at 8:31 PM