Alex Ozers On My Blog! 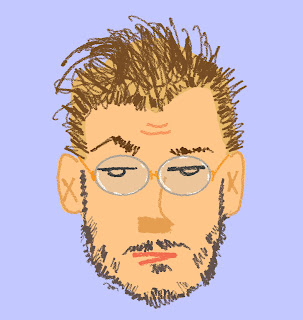 This rarely happens. Actually, it's never happened before. I teach creative writing, and I definitely encounter--with some regularity--impressive stuff. This time, however, the timing of this student piece with my own book life was, well, ironic. In a new sincerity way.  (Wink. Wink. Alex Ozers filled me in on this New Sincerity business; apparently, the Age of Irony is over and emotional authenticity is the rage.)

As you know, I listened to David Foster Wallace's Infinite Jest--all five million hours of it--this spring. And Alex, a big fan, simultaneously wrote this story in class. I think I suggested a very direct reference to DFW in the title when he edited it, something like "in honor of David Foster Wallace." In the vein of the late DFW . . .

Alex ignored this suggestion by his writing prof, like any good writer would. Alas, I thought I'd be the one to publish it online! It would be the appropriate ending to my own DFW rumination, icing on my blogging cake.

Alex Ozers is a visual artist working in Phoenix, AZ, but he thinks language is pretty cool too. He reads and writes tedious fiction in his downtime or whenever he can afford to blow off life's responsibilities.
Posted by Jennifer Spiegel at 3:51 PM