U2 Retirement Party: A Long Super-fan Essay for My Children (or, Who Has Time For Any Decent Stalking?) 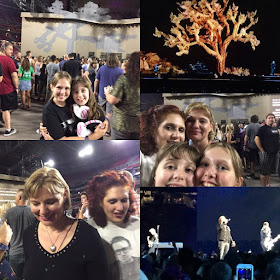 An Introduction:
In the summer of 2001, I wrote an “open letter” to U2, called “Love Rescue Me: Entering the Holy of Holies” (Image, Issue 31). You might imagine the hilarity. In it, I pretty much gave up U2 after years of mildly obsessive fandom. In the decade or so that followed, however, I continued with the completely-sane-and-legal stalking (from afar).
My kids thought the Bono poster in the office in our house was a big picture of their dad.
Like they really thought this.
So on September 19, 2017 (some sixteen years after my published lie), U2 was scheduled to come to town for the thirtieth anniversary tour of 1987’s The Joshua Tree. By now, I was forty-seven, married, the mother of two girls, a breast cancer “survivor” (meaning I’d probably be dead soon), a part-time college prof, and the author of two books.
I began—for my girls—a countdown fifteen days prior to the big 2017 concert, which we would attend along with my best friend from childhood, Laura Cerny. Laura was an added bonus, as I had seen most of my major rock n’ roll shows with her—including the original 1987 U2 concert.
Again, I declared my “retirement.”
This time, it had very little to do with the band. I just couldn’t do that stadium thing anymore: the cacophony, the ringing ears, the standing—combined with my post-cancer/post-chemo incessant hot-flashing which would likely intensify in crowds, my exhaustion after nine-thirty p.m., and my anxiety about going out at night without Tim (my unlikely husband—man, are we an unlikely pair) who really has no desire to see U2 whatsoever.
I’d pass the torch—so to speak. For me, this was all about my girls. I’d take them, and be done with it. Done with rock n’ roll. Or at least done with this aspect. I’d sing a long to the oldies station.
And I now offer this countdown: On September 19, 2017, I’d retire (for real)—but I wanted to be there with my kids to celebrate the end.

Fifteen Days before U2 Retirement:
In 1987, Laura and I went to Paradise Valley Mall at the crack of dawn and waited in a real, physical line outside of a Dillard’s department store, which I guess still exists. There was no Ticketmaster. Pearl Jam had not yet fought its losing battle against the almighty ticket-selling monopoly. But, know this and know it well: Eddie Vedder was probably doing the same thing that we were in Seattle: standing in line for U2 tickets.
Yeah, I bet that even Eddie liked U2 back then.
Laura and I were not in line for tickets, though. We were in line for line tickets, tickets to tell us how to get back in line to buy the actual tickets.
A wild, frenetic tension filled the air. Given our demographics, however, we were all surprisingly polite and orderly, savvy in our rock n’ roll ways.  Then, at the given hour (9 a.m.?), we marched—still in order—through back hallways and a stairway to the Box Office Counter, and there, there, we spent, like, twelve bucks each on our golden ticket that got us into our own Gen X Willy Wonka Chocolate Factory.
We didn’t even know we were Gen X yet.
This was for my first U2 concert.
Thirty years ago.
I was seventeen.

Fourteen Days before U2 Retirement:
I actually really did give up U2 for a few years in the nineties. This is true, but it's mostly a forgotten era because I lived in New York City and I was in my twenties and it's all part of that shadow existence I apparently once had: Did I really live in New York? Had I really given up U2? Who was I back then? Not this mom, this broken-bodied woman? Who was that girl-child, unruly and awkward?
It happened with Achtung Baby.
I still don’t like that album.
This was that weird time when Bono got all leather-y and started posing in photos with Christy Turlington, and Naomi Campbell was around. Do you remember that? The age of supermodels draped on ugly rock stars, suddenly making them hot?
(Minority opinion—Zoooropa is a better album.)
My tune changed as I got older, did some selling out myself, wore my own masks, tangled with my own supermodels, and slunk back to the studio. Incidentally, I've never seen Bono's purported arrogance as anything other than the sin of the artist, the mixed bag of talent and shame in artistry, a kind of loudness used to overcome "the horror, the horror." They sold out, but who hadn't? Achtung, Baby, indeed!
Thankfully, the entirety of that period without them was in between world tours.
And I never really missed a thing.

Thirteen Days before U2 Retirement:
As a result—a direct result—of my U2 habit, I was launched into politics. True story.
Those of you who know me personally can blame U2 for my obnoxious facebook politics which probably lost me half my friends. Bono! That Mofo!
Wait. Isn’t that one of their songs?
When I went to college, it was a given that I'd major in creative writing or English. I mean, I wasn’t good at anything else. But U2 forced me to double-major in Political Science.
You gotta understand something: A U2 Concert especially in Arizona in the late eighties  was a political event. Every one of their shows involved Amnesty International petitions, Human Right Watch gear, flying white flags. But we had Governor Evan Mecham (January 6, 1987 – April 4, 1988), who was shrewder than Trump and perhaps crueler. He is most known around here for wanting to cancel the Martin Luther King Jr. Holiday. This caused a nationwide protest. The state was boycotted. Impeachment calls abounded. And U2 got in on it.
No proper U2 fan in AZ will ever forget that era.
From there, my now defunct career was launched.
Certainly, through U2, I learned about Burma, El Salvador, the IRA, Apartheid, Amnesty International, the United Nations Declaration of Human Rights, International Women's Day, and others. Can you believe I went on for a Masters?
I really can’t.
What was I thinking?
Trump and I have one thing in common: we are atrociously unpolished.
Which means this: we'll never be able to sit at a dinner table and say the right things. NEVER.
I had no business in politics.
MLK Forever!
But it's all U2’s fault.

Twelve Days before U2 Retirement:
Was I, am I, crushing on, um, Bono?
I mean, really, c'mon!
I’m not.
When the U2 thing hit, I was—for sure—a teen-aged girl with all the usual complications. I was, however, proud of myself for my clean-kind-of-love for the band.
I was so mature!
Like a real connoisseur of The Arts!
Bono wasn't exactly a pretty boy.
And I liked pretty boys.
But, then, yeah, I had a crush on him by the nineties. (Who didn’t?) But this is really what happened: There was just no way I was capable of making my fantasy life somehow compatible with reality. In my head, I couldn’t possibly kill off his real wife. I just couldn’t.
I bet this is just me.
By the time I hit my early twenties, I was disaffected—listening to Liz Phair, PJ Harvey, the Tragically Hip, Tom Waits.
Bono was just an old friend.
Which is where he has remained.
Familial, almost.
When he does one of his dumb stunts, I blush for him and think, Dude . . .

Eleven Days before U2 Retirement:
Why retirement? Why so dramatic?
First, there's my own questioning about the validity of rock n' roll and aging. Who writes the good songs? Who can best hit the emotional notes, capture longing and loss and desire? Have you ever heard a middle-aged person write a song like Morrissey's "Late Night, Maudlin Street" or even that dumbass, theologically ignorant song by The Verve Pipe, "The Freshmen"? Have you ever heard a middle-aged person write a song as politically-charged as "Sunday Bloody Sunday" or one as existential as "Bad"? How old was Tori Amos when she was pounding those piano keys, centerstage, only her and the piano, vamping it up and playing like a prodigy and singing nonsense lyrics that burst open arteries like, "You're really an ugly girl, but I like the way you play?" How old was Led Zep when they, alone, like no one ever else would or could, wrote music that was intrinsically sexy?
In short—and this is hard for me to say—maybe rock 'n roll and its passions are for the young.
Not that "older" artists lack emotional depth.
Rather, our songs or books are more tempered, wiser, less given to fleeting pleasures, less—perhaps—whimsical? Am I wrong?
We. Can't. Do. That.
We've been through too much.
Frankly, I think the last few U2 albums are "okay." My motto has always been this: A bad U2 album is better than everyone else's good one.
I’ll stick by that.
There is minimal profundity in the last few U2 offerings.
I have to look really hard for profundity.
And there are no more anthems.
Second, well, they're not just old; I'm old too.
It's late.
It's loud.
I have to stand.
U2 isn't even cool.
IN FACT, I'M UNCOOL!
I'd probably have a better time putting my kids to bed and watching "Call The Midwife" with Tim till ten p.m. and then going to bed.
Third, my husband has no interest in U2, never has. He went happily to see Bruce Springsteen with me. We did a little Earth, Wind & Fire once. Don Henley, for some reason.
Yes, he did go to that one U2 show.
But he hated it, especially since we were up against the stage with the diehards, reaching over the barricades, standing next to speakers.
And married people: are rock concerts for them?
Like, should he stand behind me, hold me, and sway during the poignant love songs, like "One" or "With or Without You"?
What is the correct rock n' roll posture for married people with kids?
We actually recently went to a show together to celebrate our thirteenth anniversary. In The Valley Below. He picked, and he's cooler than I. Hipster/White Stripe-ish outfit with a surprisingly Pet Shop Boy-sound. We were at the Crescent Ballroom in Downtown Phoenix. There were two opening acts. Our band got on stage close to eleven.
And we were dying.
We were absolutely dying.
Tim, on our thirteenth anniversary, turned to me—his long-ass-suffering wife who lost her good looks right around the time Kurt Cobain died—and said, "This is the worst night of my life."
Ha!
He said it on his anniversary!
So I'm done with this bullshit.