If I were rich and untethered, could eat whatever I want, had low blood pressure, owned a German Shepherd, had already spent some time in England, was able to afford Hulu, wrote a bestseller that was also artistically stunning, and knew a few great friends in the area, I would live in the state of Oregon. Or San Francisco. This is the first thing I'd like to tell you.

We have returned from our book tour, my book tour--which secretly fronted for a family vacation. Yes, my kids and husband were present.

If you've read my book, And So We Die, Having First Slept (link here), you've undoubtedly thought this: "Hey, I wouldn't let MY kids hear that." I didn't let them, either. That's one good part about having your event at a bookstore or library. Places to read books. This is the second thing I would like to tell you.

I won't bore you. Rather, I'll offer some advice and some secrets. A secret: someone truly crapped their pants and rushed to a park toilet outside of Portland and had to have his or her underwear cut off with a pocket knife because the park toilet was so disgusting that taking off the pants and shoes was tougher than cutting off the underwear and spending the rest of the day without them  (I will not entertain further questions about this.) Following this event, we spent the day at the Oregon Zoo and Powell's. One of us was not wearing underwear. Is this the third thing I would like to tell you?

Enough with the numbering . . .

I should tell you other UTTERLY COMPELLING things.

I truly believed (believe) in this book. I have a highfalutin, egomaniacal sense that it's a good book. It's had a sad publishing history. I have felt the artistic doom and the professional woes of its history. So, I put everything I personally could into it. Which was limited. I feel like I really went for quality. I had a few great people on board. I seriously spent money on weird things because I (with my freakin' degrees in creative writing) tried to be a business woman. I bought Facebook ad space. I tried a Book Riot ad campaign. My guess: I sold a copy or two from this. I tried to sell my book to small publishers to re-publish it. But EVERY SINGLE ONE OF MY FRIENDS HAS ALREADY PURCHASED IT, SO, WELL, WHO ELSE IS GOING TO BUY IT? I'm just sayin' -- writers, know what's up.

As a final book-push (it is slightly final), I went on a book tour. I'm doing some big things this summer, because--again--I believed (believe) in its value. But the June tour was a big deal. My attempt to move outside of my circle of friends. We hit the coast.

Another UTTERLY compelling thing is that my husband must get some attention, like a huge amount. Even though he has been my Sugar Daddy from the get-go (Do Not Marry A Writer), he supported my financially-draining efforts. I'm not even completely sure that HE believed (believes) in this book like I do--but I know that he loves me, he knows this was important to me, and he supported me 100%.

Despite ending up in an Urgent Care the day before departure for an as-yet inexplicable pain that seems to be nerve- or back- or shoulder-related. Yes, Tim was in Urgent Care before we left.

In our family, we assume it's cancer. (He has an MRI on Friday.) But he was in EXCRUCIATING pain for our whole vacation/book tour. We had his bike in the Honda the whole time (he's a crazy mountain-biker), and he was in too much pain to do it. But, God Bless Him, he took the kids to the beach every single time he could.

That's not all. About two or three days before we left, Tim's company--which we both have strong feelings for (I'll explain in a sec), went on furlough--due to funding. We hope it's temporary. Despite the fact that we will essentially be without his income, we decided to go on the tour. We did think about canceling it. We really did. Because our middle class status just got middler--and we were heading for broke.

Tim works for a cancer research kind of place.

Like noble and good work, like the kind of work you don't have to hate yourself for doing.

Not all of us are so lucky, if you know what I mean. For that reason and others, Tim is committed to them. For my part, I have to assert this: when I was going through my breast cancer debacle, they really were there for us. Tim went to every chemo with me, missing work to be with me on Wednesdays. We got these fabulous meals from his coworkers that I'd never be able to make even if I were cancer-free. I will remember this!

But here we were (are). With this baggage and more in the Honda, we left on my book tour! 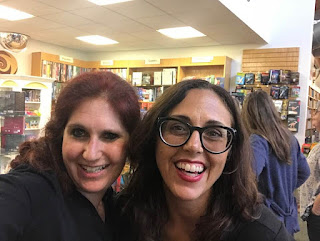 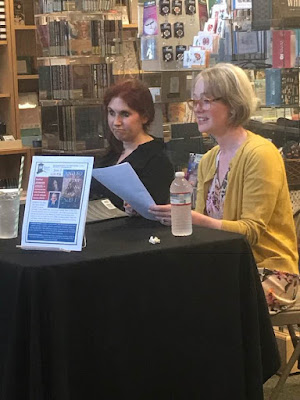 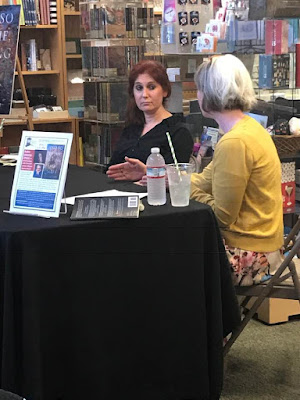 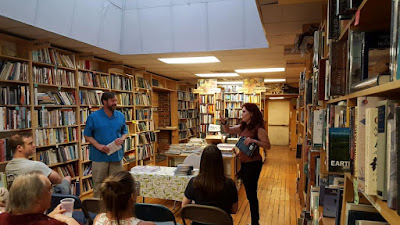 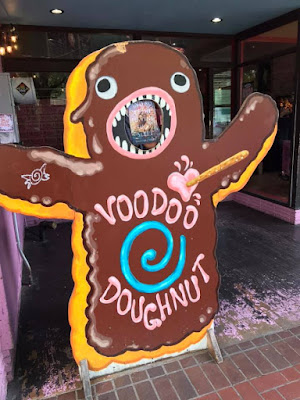 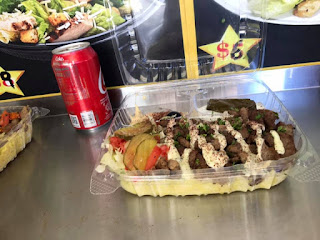 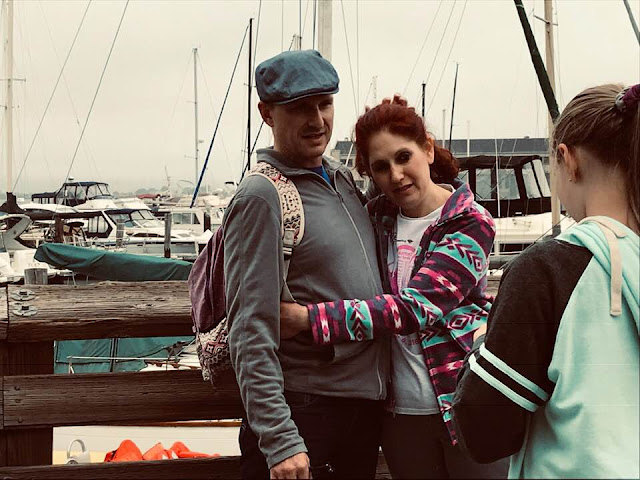 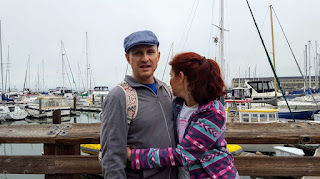 Posted by Jennifer Spiegel at 11:30 AM