I never made it to the Emerald City, but this DID happen. 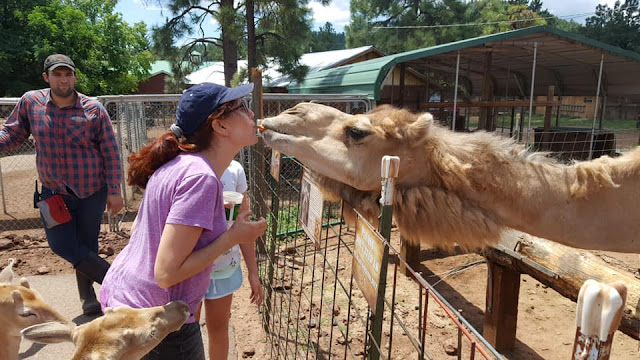 You can listen to Elton here.

So I've finished my book tour, and my summer is pretty much over. On Monday, I will begin prepping for my fall classes. And So We Die, Having First Slept has made it to the beach and the Redwoods and a few famous gardens, crossed the Golden Gate Bridge, and dallied in coastal coffee houses and chic art galleries alike.

My last stop was Flagstaff, Arizona. Though I already did a little Q & A post, I thought I'd answer a few lingering questions (at the end). First, Flagstaff! The highlights . . . 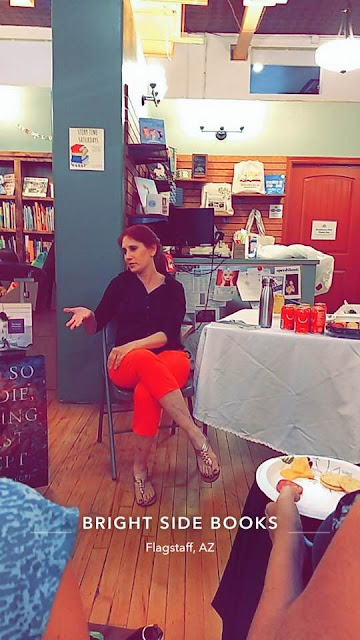 I'm just going to tell it like it is. I loved Bright Side Bookshop. It's great. I hope they'll have me again. I love Flagstaff. I'd like to move there, frankly. I had a nice (modest, but nice) crowd. Here's the honest part: I think I was slightly off. I do!

See that photo above? Jenifer Anseth took that one (she's my second oldest friend in the world, and she showed). Jenifer has been misspelling our name for decades now, but I totally forgive her because SHE SERIOUSLY CAME TO MY READING FROM PHOENIX!

But back to the photo. Notice that I look like I know what I'm doing.

I seriously was inarticulate and--FOR SOME REASON THAT I WILL NOW OBSESS ABOUT--a tad nervous.

First, it was the end. I had a ton vested in this book. Guys, I need to confess. THIS NOVEL MEANT SO MUCH TO ME. I will paraphrase a fellow writer, but I won't name him. He read an early copy, and he said, "I get the feeling that writing this must've cost you a lot." And I will say to you now: It did. Its life has been rough. And Bright Side Books was a last hurrah.

Second, this crowd was from such a crazy array of epochs in my life that I kinda felt a bit schizophrenic! I mean it! Which "Jennifer" would show up? Am I so duplicitous? Triplicatious? Quadruplitous? Let's listen to The Verve now: "Bittersweet Symphony."

I'm a million different people, from one day to the next.

Tim kinda cued in early to my awkwardness and he stepped in humorously, but I fumbled around a lot too. DESPITE THE FACT THAT THE PROSE ITSELF WAS STUNNING, I WAS A BIT OF A WEIRDO.

Still, I do want my audience to know that I was honored to have that experience with you, and I hope you love the book. Here are some of the people present . . .


Hi, friend! Thank you, Reader Person, for liking my book. 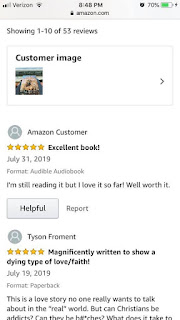 So a few lingering questions.

Jenifer might have been the first person to truly leave me speechless. She found a line in the book that I freakin' wrote, and asked me what it meant. I think I tried to B.S. In all honesty, the answer was true--but I should add this: SOMETIMES WRITERS WRITE STUFF JUST BECAUSE IT SOUNDS GOOD.

I'm hesitant to expound on certain topics. I've had several readers ask me to explain the Sappho stuff. Why is Sappho included? Is this important? I'm hesitant to explain myself here, but I'll say a few things. Brett, the protagonist, is nicknamed "Sappho" in college. Sappho was an ancient Greek poetess whose verse is amazingly passionate--and all that we have to know her. We really don't know much about Sappho at all. We only have her words.

And Brett is called Sappho. I chose to thread this Sappho-thing throughout the novel because I'm intrigued by the idea of how we become what we are. How might the naming be formative? Prophetic?

And who is Sappho?

Similarly, Brett's early life (my husband always wonders about this) is there for one reason: what might it say about her current life? How do our pasts speak about our presents?

Then, Jay asked about my process. Tim answered! Ha! I'll spare you the details, but . . . My process is that thing I do to write the freakin' book. It's what I do, what I'll keep doing, what I can't stop doing.

Thank everyone for going on this trip with me!

I need to say that Tim has been there through all of this, and I'm so grateful. As we like to say at home, It's All True, It's All Fiction.

Posted by Jennifer Spiegel at 9:40 PM