On The Spiritual Danger of Donald Trump: 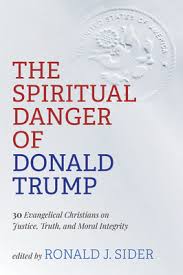 I want to write this book review, but I don’t.

I’ve been pretty good this election season, which is to say that I’ve been lousy. Besides my daily scorekeeping on Donald’s dalliances, I’ve avoided public rants—for the most part. I mean, sure, I’ve de-friended and re-friended my mom on social media three times. And, yeah, Tim and I have this ongoing conversation on highfalutin topics that touch upon systematic theology and media theory, but then eventually land on Biden’s public gaffes and Trump’s small vocabulary. Oh, and one person said to me (with some patronizing pity), “People are praying for you . . .”

This, finally, will be my one and only direct and public commentary on the topic of the 2020 election. I read this book of essays, published in June 2020 and written by thirty Christian scholars of diverse political persuasions, with a fair amount of voracious fervor. I was intrigued. Hungry. Enlightened.

Before I get into that, I do think it’s important to note that the book is very contemporary—seemingly written a moment past the January-February 2020 impeachment trial of Trump—but maybe only on the cusp of the Covid Pandemic and prior to the death of George Floyd. And I know, having witnessed it in my own life, that those two events hit the world hard, influenced the forthcoming U.S. election in November, and changed many voters’ opinions. And, well, little did any of us know that Supreme Court Justice Ruth Bader Ginsberg would also die on September 18, 2020—causing a big stir. I don’t know if the authors in this collection would have shifted in their thinking had they written following these events (I think not), but it’s a conversation that I’d personally love to have with each of them.

I’ll acknowledge my own biases, so you may choose to read on or not . . .

Here we go, in one concise paragraph:

In 2016, I aligned myself with the #NeverTrump movement, which is a Republican thing. I’d call myself a moderate who’s right-of-center. I’m registered as an Independent. I’m pro-life, pro-DACA, and I kinda prefer hanging out with Democrats because, no matter what my GOP friends insist, I see way less racism (which I really hate) on the left and they’re kinda nicer. I’m told this is unfair. I think building a wall is dumb. I did not vote for Trump in 2016, and I will not vote for him in 2020.

Frankly, at this very moment, I feel admiration for Mitt Romney of all people. Once upon a time, supporting a Mormon dude who once drove for twelve hours with his dog, Seamus, tied to the roof, seemed CRAZY UNLIKELY. And now I’m a big fan of his.

I like the idea of getting a Conservative woman on the Supreme Court, and then seeing Trump lose.

• Opposed to “Cancel Culture” because it jeopardizes artistic integrity

• Understands the wariness over BLM, but thinks it’s vastly overblown and shameful to be callous about the outcry

• Fear over Antifa warrants a shout-out like this, “Get a life!”

• Believes that Trump will win

• Can’t believe anyone would support that Wall stuff

• Wishes this were over

Was that more than one concise paragraph?

Bring on the hate mail.

I do not pray for Biden to win.

I do not pray for Trump to lose.

I pray that our system is robust enough to survive the next presidency.

On The Spiritual Danger of Donald Trump. What a book!

As I’ve thought about this—nonstop since 2016—I’ve tried to consider where exactly I stand. As I see it, a Bible-believing Christian has the following options:

I can abstain from voting altogether, arguing that all I’ve got is my own personal integrity and I do not want to support either candidate.

Are these the only positions? Is this a question of Christian liberty? Is there a correct stance?

The idea of voting on the basis of character seems like a misnomer. Though I’m more likely to want to hang out with Joe Biden, I’m not willing to make a case for his moral superiority (but, well, it does seem like he’s the nicer guy to have at the family BBQ).

If there is Christian liberty, dogmatism and anger and trying to “shame” people into thinking you’re right, doesn’t sound so hot.

If you’re a personal integrity/abstainer person (and I might be this person, which will anger every one of my friends on every side), consider this. Do you boycott the following?

• Target (weren’t they going to let transgender folks choose their preferred bathroom? Do I have this correct?)

• Starbucks (aren’t they big libs on everything, right?)

• Apple was mentioned to me yesterday

But, then, say you’re a Democrat. Do you, for the purposes of personal integrity, boycott the following?

Now, if you’re like me, you pick and choose, and—if push comes to shove—and someone asks you about this, you’ll say: I go to all of them. I do, however, refuse to go to SeaWorld and Jimmy John’s, because I once saw a picture on Facebook of their bigwigs posing over the dead bodies of animals in Africa (lions or elephants or something like that, and I was, like, I’m done.) A day in which I went to both Starbucks and Chick-Fil-A, followed by an evening of Netflix, sounds pretty good.

In other words, I lack integrity?

If we accept that we live in Babylon (I heard someone say that), we just deal with these compromises. As someone else I know said (I’m paraphrasing), We separate the meat from the bones.

And here is where this mighty book of essays unhappily resides: What are we to do in the face of Donald Trump?

I wrestle with this question acutely, friends. Is there Christian liberty (a mucky topic I think about)? Do we choose the lesser of two evils (seemingly everyone’s favorite phrase these days)? Do we vote along party lines? Do we take some kind of notably inconsistent stance on personal integrity?

These were the questions I was mulling over when I read this book.

And here’s what I have to say about this collection of essays: I found this book deeply moving. The world is better for it. I am better for it.

I marked up my copy, and I feel that reiterating their points in my feeble tongue will not serve my Christian Reading Audience. If you are both a Christian and a reader, I would urge you to check this book out. Arguments have been flying around, oft inarticulate, and here is a comprehensive, biblical, earnest, convictingly kind discussion (I have been unkind).

Yes, it’s about the spiritual danger of Donald Trump.

Yes, you’ve heard much (but not all) of this before—but probably not delivered in this manner, because the book exudes the Fruit of the Spirit.

Yes, the writing does not take into account Covid or Black Lives Matter or Biden (there is no mention of him whatsoever.)

Before I make some closing remarks, I would offer one fair criticism. The book makes a very strong case for what I shouldn’t do. It doesn’t make much of a case for what I should do. Is this, then, leaving us in some kind of Black hole of Cultural Despair? A vacuum? Am I back where I started?

I believe that the Amish don’t vote?

Is that where I’m at?

Is that what these authors are advocating?

Well, they do think Christians should not be supporting this guy.

I have to say that this book was everything I have wanted to say, but it was all said better than I could ever say it. I’m grateful to know that these Christian men and women are with me. I want to be on their team. I was, in truth, thankful for them.

Mark Galli, the former Editor-in-Chief of Christianity Today, bravely, fiercely, honorably penned an editorial called “Trump Should Be Removed From Office” in that heralded magazine that probably, at one time or another, landed in your house like it did mine. It came out in December 2019, and—somehow or other—it landed on my radar that December. I loved it. I thought, Here it is! Finally!

It’s my understanding that Galli then retired right after its publication, and this was (no doubt) his grand finale. Grand, indeed!

Galli, though, writes the first essay here. It’s a tight and convincing collection that might require a strong dose of humility in approaching.

16 There are six things that the Lord hates,

seven that are an abomination to him:

and hands that shed innocent blood,

18 a heart that devises wicked plans,

feet that make haste to run to evil,

19 a false witness who breathes out lies,

and one who sows discord among brothers.

You can ponder Stephen Haynes’s thoughts: “His [Trump’s] evangelical supporters may have given up on Christianizing Trump; yet no one can dispute that he has succeeded in Trumpifying American Christianity.”

What do we make of all this?

I guess I read this book with sadness. Dare I say, profound sadness.  I’ve talked about this in other forums. Cancer attacked my identity as a woman and as a writer. I wrote as if that was my battlefield. Sword of the Spirit stuff.

This Trump Era has been another kind of attack on my identity. My identity as a Christian. You know, I’m fiercely anti-abortion! I’m so pro-private education! I’m not going to tolerate racism! But where are my people? I’ve been sad. Is this where we’re at? Is this how it’s going down? I mean, are these my people? What are my Gen Z kids thinking? Will my own mother go to her grave in a MAGA hat? What would you say if you were a fly on the wall and you heard Tim and I debate politics?

As I’ve debated with myself, I know my stance might be aesthetic. I think I’d need to devote a separate piece to this, but I’m sure that part of my #NeverTrump stance is aesthetics. Individuals might place different value upon language. Even though my politics are probably right-of-center, my aesthetics are at work! Language matters. Words matter. Truth, Beauty, and Goodness required.

Do you think God, upon arrival at the pearly gates, will ask, "Did you ever vote for Donald Trump for President?"

I doubt it, but just in case, I'm not doing it.

He might actually say, "Did you ever call 'Truth' a lie and a lie 'the Truth'?" (I'm not sure how God would punctuate that.)

And that's what this book is about. By the time I hit page 6, I was thinking that this is the book I've been craving since 2016.

Posted by Jennifer Spiegel at 7:53 AM