Self-appointed cultural critic? Didn't I just "win" some other battle? Is this my new warfront? 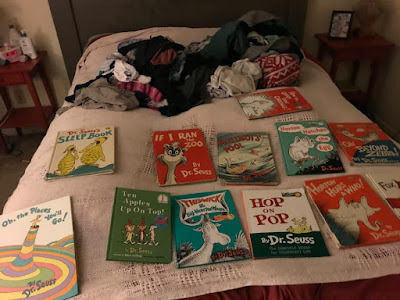 My collection with the clean laundry. I have three of the six "bad" Seuss books.

I have a ton to say. I know my evangelical friends want to blame Biden and the Left. I know it.

First, this is a cultural shift and politics are really secondary, so Biden is seriously only symptomatic.

Third, the compromise was ALSO made on the Right when y'all got high and mighty about, of all things, Harry Potter (and its "witchcraft") and the Left picked it up by blasting JK Rowling for her comments on trans-folks--so he who casts the first stone, Right- and Left-wingers. . . .

In summary, the problem is not political. Please don't be daft. It's cultural, and the Church needs to take responsibility for failure to develop a philosophy on and a value of Art.
Plus, Twitter is so much better without Trump. It's not freedom of speech. It's decency and morality.
Here are some random "cancel culture" notes:

Please feel free to add your thoughts!
Posted by Jennifer Spiegel at 8:38 AM