One Year of Covid 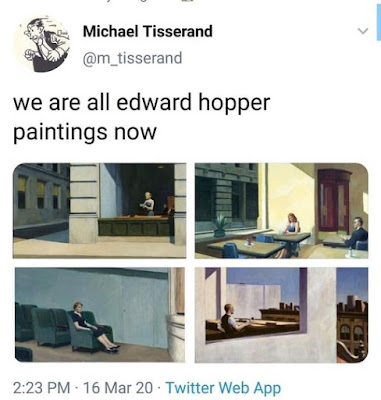 I’m the English professor whose class went on spring break in 2020 and never came back. When we left, none of us knew we were gone.

Only two students stand out now (I have the uncanny ability to remember names during a given semester and then instantly forget them when I turn in the grades). One, a very pretty and fit-looking girl who reminded me of Skipper, Barbie’s younger sister, and another, the Best Writer in the class, who was gay and in-the-closet when it came to his parents.

Skipper’s dad was an epidemiologist and she was too rightwing for me—but I liked her confidence and sass. She didn’t take my leftwing bull crap, but I felt like we tangled constructively, as if we really were in college. Skipper began March 2020 with tremendous flippancy—telling us that she’d fly abroad for spring break and her dad wasn’t worried about Covid. He knew how these infectious diseases were, and she wasn’t going to get all worked up.

The Best Writer told me that he was raised in a religious home, and he thought he’d always stay in-the-closet with his parents. This was way before Covid. I thought he must’ve had a great high school education, because he wrote so nicely. I liked him.

Then, we all left for the break. I don't know what I was thinking. No one really told us anything.

We never returned to that classroom.

Skipper wasn’t blasé when I next heard from her online. She finished the course without much pizzazz. Nothing about her online presence stood out. None of us finished with pizzazz, really.

The Best Writer disappeared altogether. He went home, and that was it. I got one email after I asked how he was, where he was. Privacy laws stood in the way of me pushing it. I was a professor, on institutional email. I couldn’t say, Are you okay? Do you need to talk? You know you’re smart? He went from an "A" to an "F." End of story.

I only think about these two kids. None of the others.

Did Skipper go home? Did she give up her European vacation plans? Was she one of those non-mask wearers? Did she think we were nuts when we later went to a George Floyd protest? Did she call for “Law and Order” when Portland did its thing? Did she watch Tiger King?

Was the Best Writer suicidal by June? Did he have a good friend? Were his parents loving, sensitive people? Did he decide to talk to them? Why did he end up doing so poorly? What caused him to give up? Where is he now? What did quarantine—that Sartre-esque No Exit State—do to him?

(All of this may be true, but it might also be fiction. I'm a fiction writer first.)

I didn’t know I’d be Zoom Savvy in a couple weeks.

I didn’t know I’d spend that first weekend of “spring break 2020” (notice the quotes) rushing from Winco to Fry’s/Kroger, from Trader Joe’s to God-forsaken Walmart (I have a strong aversion to Walmart) with my husband and kids—to stockpile toilet paper, pet food, and frozen pizza. It was a blast, in a macabre way, the four of us, mask-less because masks weren’t yet in. I’ve always loved a good Zombie Apocalypse, and this was my adventure. My family life, imperfect of course, was pretty damn good—and I loved the Us-Against-The-World Vibe. As long as I could use toilet paper and feed my pets.

It was all fun and games. Until it just wasn’t.

I don’t really remember exactly when it lost its glamour.

My kids started getting unhappy about school on Zoom and not seeing their friends.

George Floyd’s death was all-encompassing, and we broke our quarantine.

The election got out of hand, and the tension was so bad that we all took sides in this extreme way, as if we had moats surrounding our own individual and well-fortified (stocked) castles. The polarization was so real. My relationship with family members went from close-knit to shallow.

One of my best friend’s dad died from Covid. Like, his dad really died. The first casualty I knew.

Tim’s uncle passed away in a nursing home, without his wife and child even allowed to see him.

I know of at least one marriage that seemed to crumble.

A few addictions made resurgences after times of recovery.

Listen, I had a good time, but I know I’m among the few—and I won’t ever dismiss the grief and pain of others. I have been privileged, and I’m aware that unexpected things happen still. Do I count my blessings? I try.

As of this writing, my husband and I are both vaccinated. We both have jobs. We had jobs throughout, and I can only imagine how devastating it might’ve been if that were not the case. We get along, and I can’t imagine how badly it would’ve been to be unhappily married or alone—just all alone. You and that Internet, telling you stuff, whispering in your ear, seducing you, providing the only company you get. What might the effect of that be on a soul? I’ve actually turned into this GIANT introvert in middle age, but how might that alone-ness have played out in quarantine? No one in my immediate family got sick. And I know that everything would be different if one of us had. I survived, so far.

And there were these amazing treasures to be had . . .

I had this unexpected gift of time with my kids. It’s personal. Cancer in 2015. I guess they say I’m okay (but I’ll never believe them). If you must know, I live permanently in that shadow. I do not count on my survival or my longevity. I’m not sure I’d recommend this mindset, but it’s mine.

And if I could have one thing—one thing only—I’d want concentrated quality time with my kids. With Tim too.

But I’ll never ever forget or take for granted that Quarantine Bonanza, in which my children were forced to be with me 24/7.

Was it “Quality Time”? More or less, more more than less.

And I’ll never take for granted those unlikely vacations we did in which we drove in the Honda and spent all of our time as a foursome, eating takeout or walking in the woods, counting deer (really!) or watching Netflix. It was—dare I say it—idyllic. I finally made it to Bisbee, Arizona! I stayed in a haunted hotel in Jerome! We hiked in Pine! I saw so many amazing things.

I also felt grateful for my friends! I feel, maybe, a tad guilty about how it all played out. I didn’t mind the seclusion or the working-from-home or the slicing up of my social calendar (um, more like its elimination). I had this actual, TANGIBLE relief in having no plans! Man, Tim and I were so married.

Yes, I think I’m saying that I’m an anti-social stick in the mud.

But I kept in touch with people. And I think what happened is that I actually valued them in a real way. Also, you know what? Social media sucks, but—damn it—I had connections with friends and I’m thankful for it.

Gradually, though, this thing happened. Did it happen to you? This stripping? This revamping? I began to see a select group of people in person--and it hit me hard that I had inadvertently hit “Refresh” and I sat more than six feet apart, outside, over coffee from very particular people. I want to be clear; I have others that I have not "seen" who I love dearly--but, wow, pandemic-be damned, I'm still sitting across from these few people I've been sitting with for decades. Wild. How are friends made? Why do some last? Why do some fade? Why did some persist throughout a global pandemic, and why did others halt?

This is not to even mention the amount of TV I watched.

This was the year of the Pandemic, and none of us will be the same.

Posted by Jennifer Spiegel at 3:27 PM